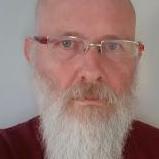 Is this a standard Ryanair announcement

75 posts in this topic